We’re finally having a good winter storm!  We’ve been having drier than normal weather since construction started last month and this was lucky for us.  Up until the arrival of the rain the crew was busy installing a perimeter french drain and ensuring drainage under the house. 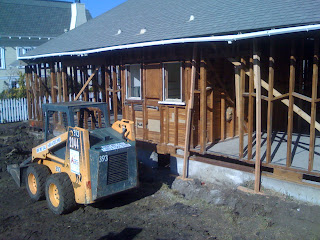 As you’ve seen in the photos of earlier posting, excessive water can cause the wood to rot and cause structural problems as well as invite mold to grow.  To prevent water damage and keeping the house dry for comfort we have specified french drain and crawl space sealing.

Note that there are 2 pipes in the trench.  One of the pipe is perforated and will take in water — this is for the french drain.  The other one will be connected to the downspouts to route the water from the roof to the rain water harvesting tank at the corner of the property.  (By the way, the installation of the rainwater tank will be done as a community workshop coordinated through the local Resource Conservation District.  Stay tuned for that workshop in the late summer or early fall!)

An interesting tidbit:  What’s the origin of the term, “French Drain?”  Well, I initially envisioned some clever drainage system in France.  It turns out the term is attributed to a lawyer named Henry French in Massachusetts who popularized the concept in his 1859 book, “Farm Drainage.”

Crawl Space Work
For a few days the crew got into their jump suits and crawled around to dig out drainage path under the house, install some pipes and sealing the dirt floor with plastic.  They had a cozy work space with lights and music under the floor.

At each pier the plastic liner was taped to the concrete using Siga tape.

Rain Garden Pit
The water from the perimeter french drain as well as any overflow from the rainwater storage tank will go into the rain garden.  This was dug about 5′ deep.  The plastic “thing” (I don’t remember what it’s called) is a way to store larger volume of water than simply having drainage rocks covering the pit.

When we get to the landscaping stage the area above this pit will have appropriate plants for rain garden.   For now it is covered up with soil and it looks like any other part of the yard.