How Much Energy Did We Use In Our First Year?

1 comments
March 17, 2014
Uncategorized
About one year ago I cut off 30-inches of my hair
and donated the half-pound of hair to Locks of Love, an
organization that makes wigs for children.  I’ve done this a few times
before and it makes me feel good.  In the past friends would often ask me,
“How’s your house project coming along?” and at times it seemed to go
on forever.  So at one point I started telling everyone, “You’ll know
when it’s done because I’ll cut off my hair and donate them.  If you see
me with short hair that means the house is done!”  So I was quite
happy when I had this photo taken because it meant the house was done and I
didn’t need the extra insulation to keep me warm. 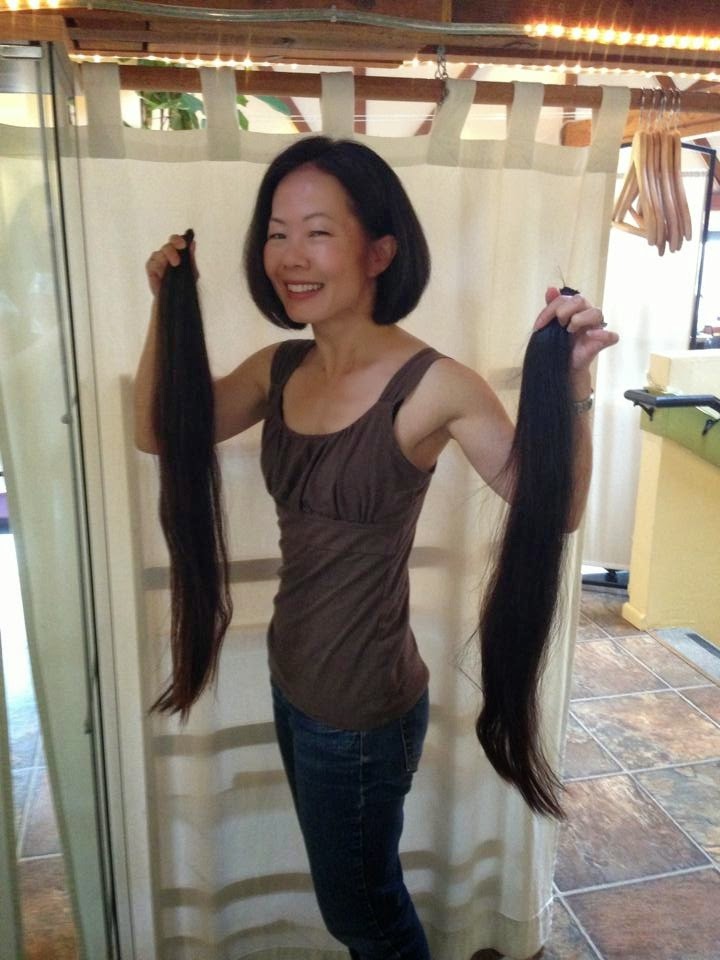 Now that we’ve been living in Midori Haus for one
year it’s time we share our energy data for the first year of occupancy.
You might recall from my previous post where we compared our energy
data for the first 8 months in Midori Haus with the energy data from the
slightly smaller condo we used to live in.  We were pleased with the
comparison of spring-summer data where our total energy use at Midori Haus
proved to be much lower than the smaller condo.  Now that we have the
energy data for the winter season it’s even better.   Let me show you some
graphs. 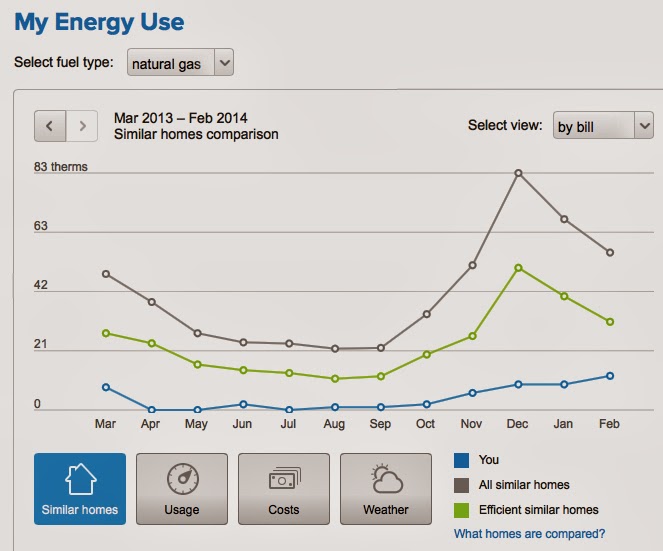 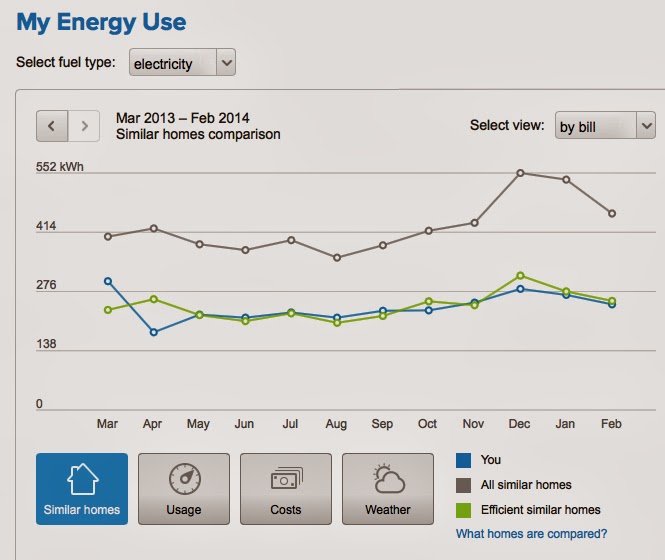 If you are a PG&E customer, the above graphs
will be familiar to you.  You can log into your account at pge.com and
select the “My Usage” tab to track, compare, and monitor your energy
usage.  They do a nice job of comparing your energy usage with similar
homes in the area.  Similar homes in the context of Midori Haus is 100
homes with similar square footage (1560 in our case) within half-mile radius
that are heated by natural gas.  At Midori Haus we let the sun do the
warming most of the time but when the sun is not shining the gas boiler
provides make-up heat for the hot water tank and the hot water warms the house.
Since there is not a category for “mostly sun-heated house” we
technically fall into the category of “heated by natural gas.”
In this past year (March 1, 2013 through February
28, 2014) we used a lot less energy than similar homes.  The total energy
use at Midori Haus was 4,334 kWh
compared to 19,596 kWh for similar homes.  Our Midori Haus used 2,869 kWh
of electricity and a scant 50 therms (this is equivalent to 1,465 kWh) of
natural gas while similar homes used 5,118 kWh of electricity and 494 therms
(this is equivalent to 14,478 kWh) of natural gas.  To put it in another
way, Midori Haus used only 22% of the total energy used by similar homes in the
past year.
By the way, we were comfortable inside and we do
not have PV (solar electric) to offset our electricity usage.  We plan to
do so in the future but it was important for us to start from the most
efficient house before we put in PV.
This next graph is very validating.  We’re
fortunate to have copies of the energy bills from the prior owner of the house.
The seller was friendly and ordered PG&E to send copies of the past
energy bill to us for the years 200 and 2006.  Back then there were 3 elderly
occupants in the house and they used gas furnace to heat the house and perhaps some electric space heating too.  Their energy bill from March
2005 through February 2006 is a good basis of comparison with our first year of
post-retrofit occupancy at Midori Haus because many things about the house is
the same:  same square footage, same foundation, mostly same framing, same
floor, same roof, and we kept the original built-in-furniture (dining room
buffet) in place.  So the reduction in energy use that you see below represents
the performance of the house before (without any insulation or air sealing) and
after (super-insulation, extreme airtightness, minimizing thermal bridges, heat
recovery ventilator, low energy lighting, and low energy appliances). 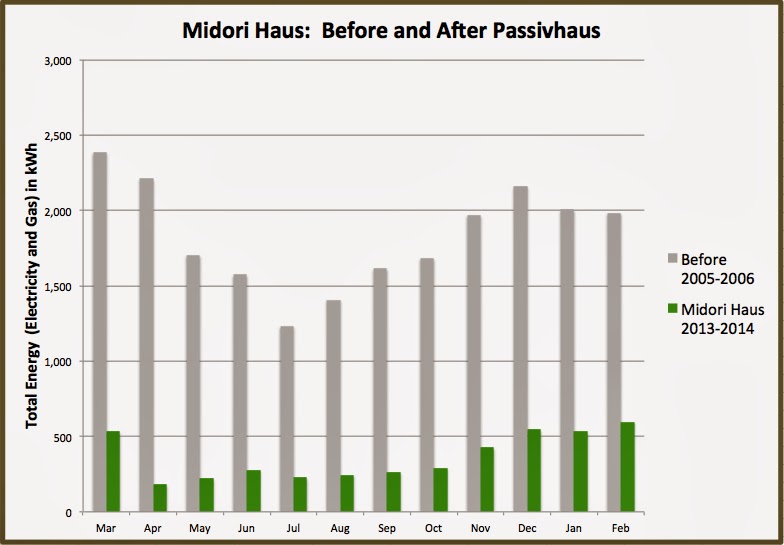 The prior occupant used 21,928 kWh of energy in one
year.  Midori Haus used 4,334 kWh of energy in one year.  That is
80% reduction in energy use for the same house!  And Midori Haus stays
in a comfortable temperature range year round with good indoor air quality.
Passive House works!
Digging further into gas usage I wanted to see if
there is a correlation between rain and gas usage.  So I overlaid the our
daily natural gas usage with rainfall.  It’s a bit challenging to see the
details but you’ll notice that the when there is rain (blue column) the natural
gas (red column) follows close by.  This confirms that gas boiler turns on
if the sun is not shining.  The little blips of gas you see in the summer
months represents outdoor barbecue use.  We have natural gas plumbed to
the barbecue on the deck.

The source of rain data is from a local weather
station that I found on the weather underground site.  The Weather Cat station
is located just 2 miles away from Midori Haus so it’s a good representative of
the outdoor condition for the past year.  Below is a graph of the daily
high and low temperature.  What you will see below is that there is always
about 10-30 degrees Fahrenheit temperature difference between the daily high
and daily low.  Because of this diurnal swing in the temperature we don’t
need to have air conditioning during the summer because the house will cool off
at night if we simply open the windows for an hour or so.

I now present to you a simple conclusion:  Passive house works.  Up until now we’ve been telling everyone, “Once we have a house built to Passivhaus standard we will use 80% less
energy than similar homes.”  Now we can actually show the data where
we have used 80% less energy than similar homes.  Don’t you want your home to be
passive house too?  :)

“Is this part of the original house?” is one of the questions people ask when they visit Midori Haus.  We feel complimented when people ask that question because we did put fair amount of effort into re-using materials to give it the look and feel of a vintage house that was originally built in 1922.  When we didn’t have any specific old looking items to re-use we bought new items that were made to look in the old style.

Let’s look at the hallway bathroom door for a good mixture of old and new items.  The frosted glass on white door with the glass door knob has a vintage look.  When friends saw this door before the renovation they would say, “That looks like the door in my grandmother’s old house,” or “My basement door in my old bungalow has a door just like that.” 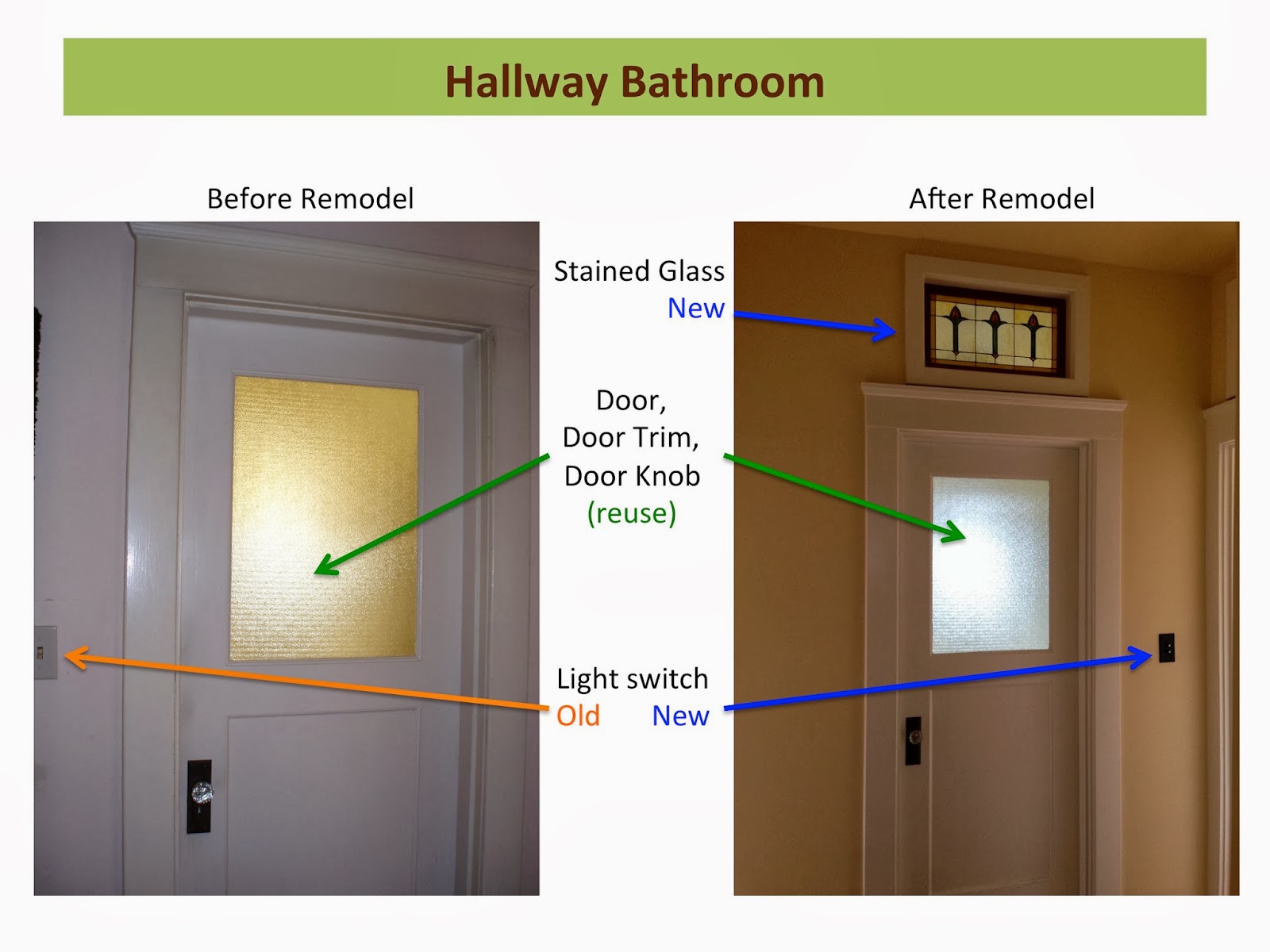 We added the stained glass window above the door to let more light into the hallway.  People often perceive this to old but we got this new from The Bright Spot.

The door, the knob and the trims are original with fresh paint.

We kept the built-in storage unit in the hallway.  These front got some fresh paint and the inside was simply cleaned.  It smells of old wood when you open the drawers and it’s part of the charm. 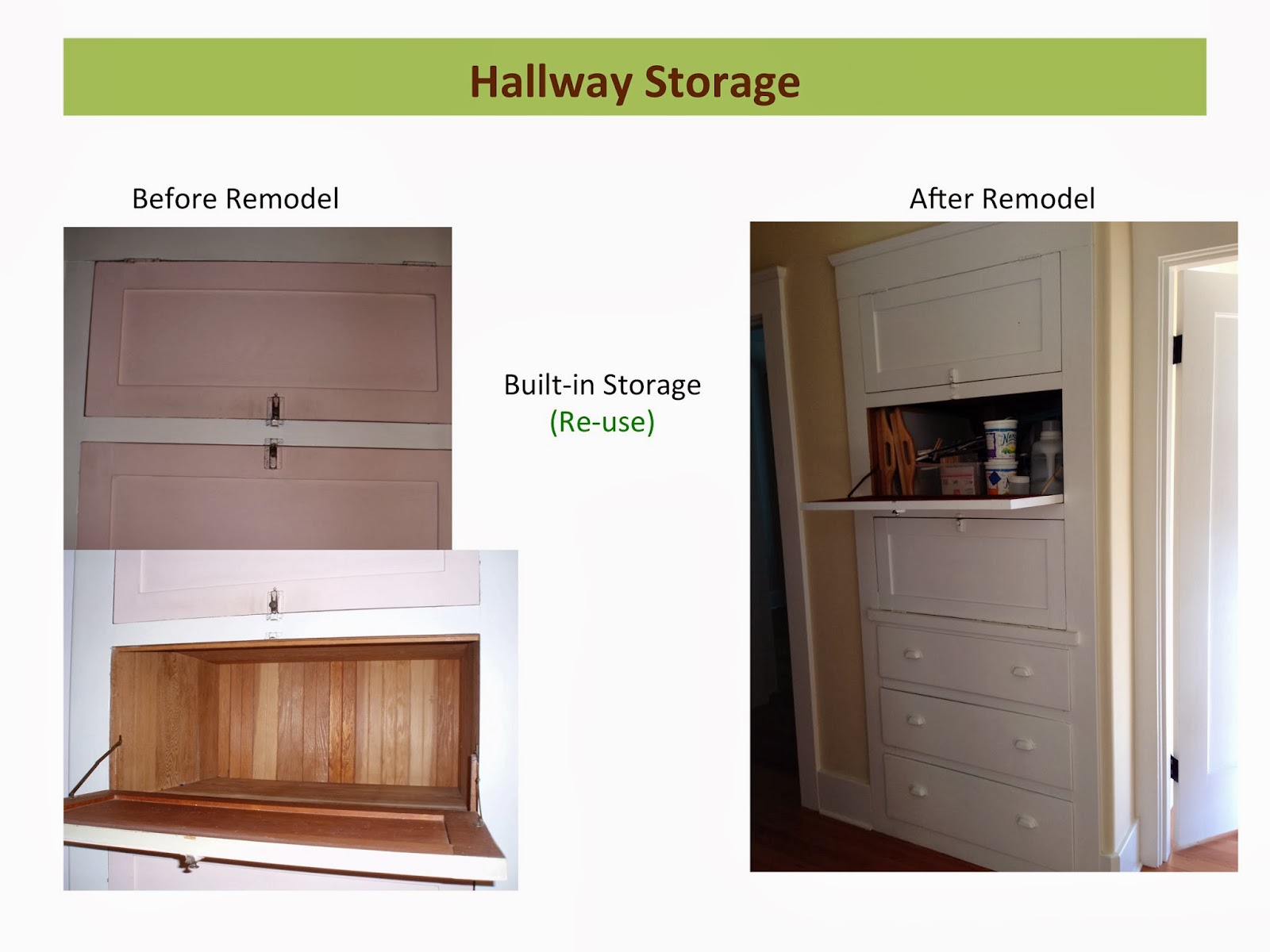 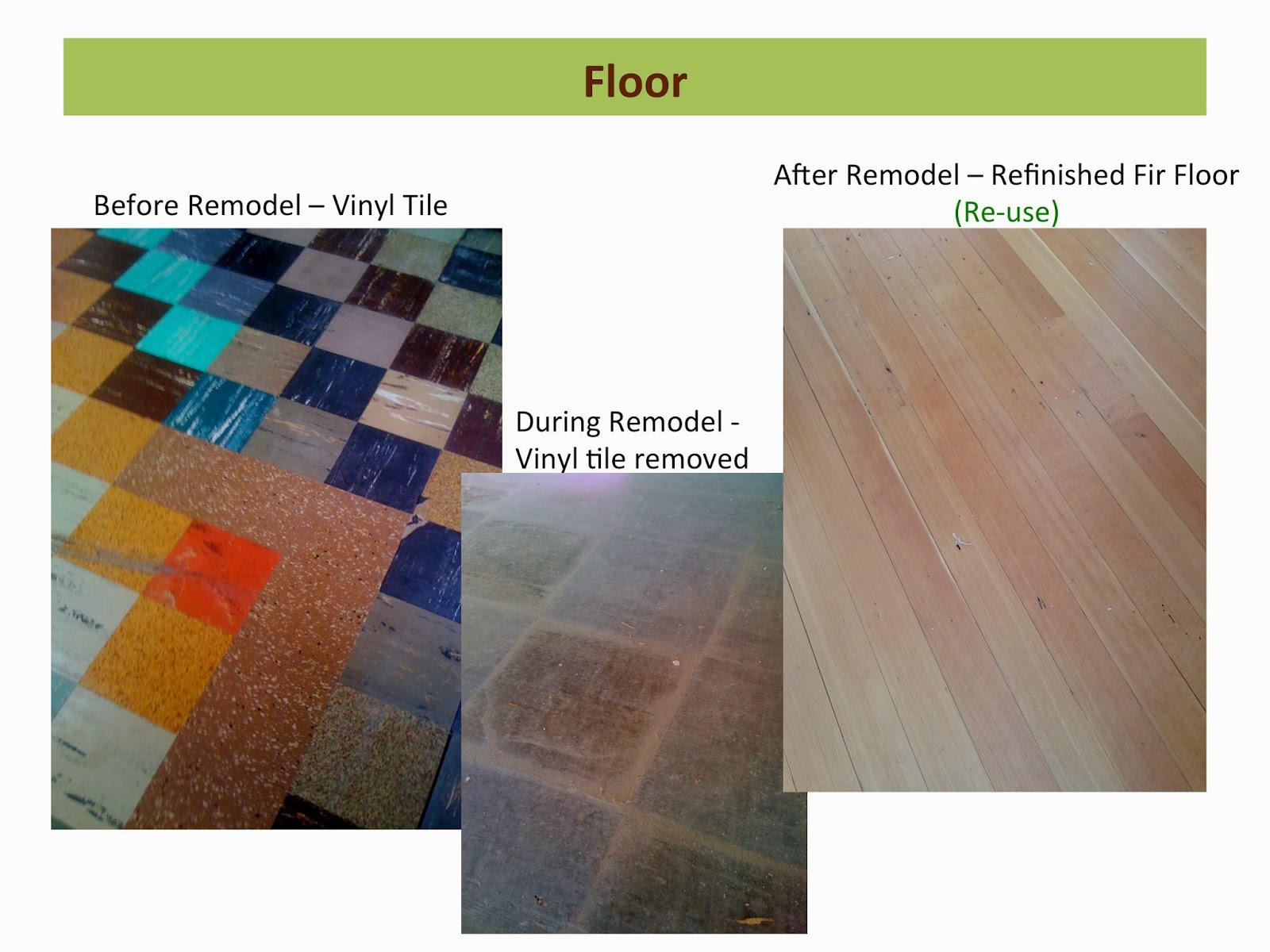 Most of the floor is original.  We removed the floor coverings (tile, carpet, linoleum) and had the original wood floors refinished. 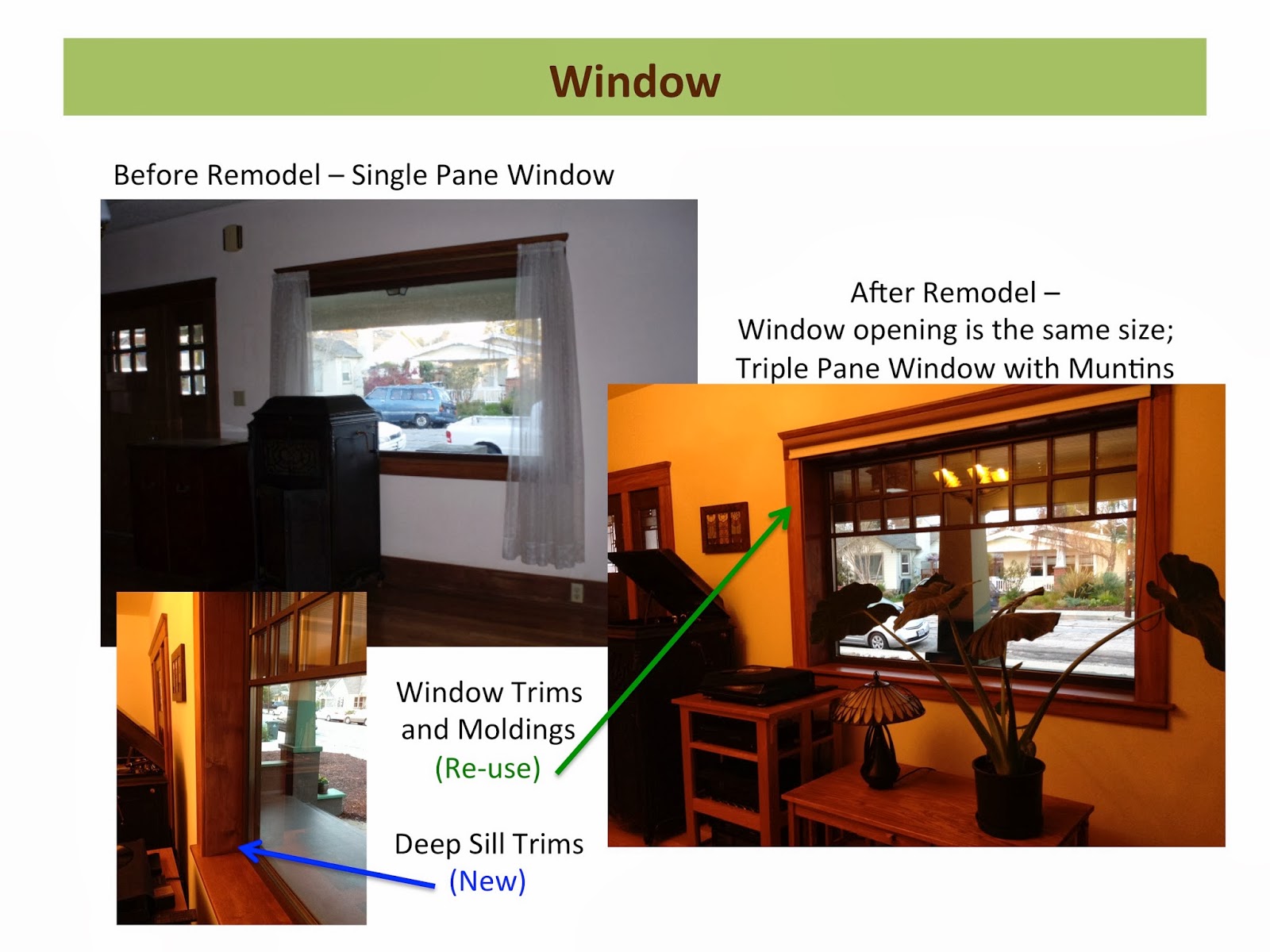 The windows on the front of the house retained the same positions and size.  The triple-pane, Argon-filled fiberglass windows have a much better performance than the old single pane leaded window.

We did re-use the trims around the windows.  Santa Cruz Green Builders did a great job of matching the wood covering the deep window sill with the original window trims. 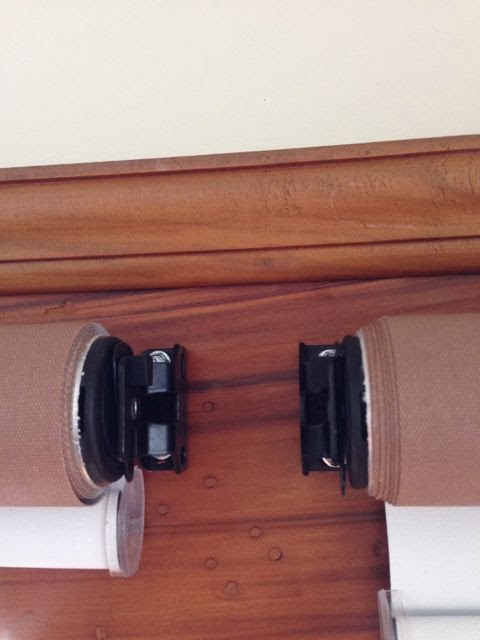 Notice the patched marks of nail holes on the window trim.  This is evidence of prior homeowners  installing curtain rods multiple times on this window trim. 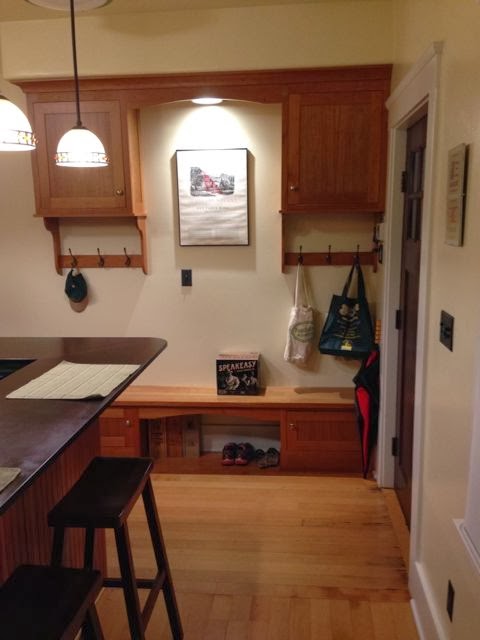 The mudroom bench and cabinets are new.  This practical set of built-in furniture was made by Loughridge Cabinets in Scotts Valley.  When you walk into the mudroom/kitchen area from the side door you can park your groceries on the bench, hang your hat and coat on the hook, and sit on the bench to take your shoes off.

Speaking of the mudroom, we did use a piece of the old mudroom in our new kitchen.  The breadboard on the wall was re-used on the breakfast bar in the kitchen. 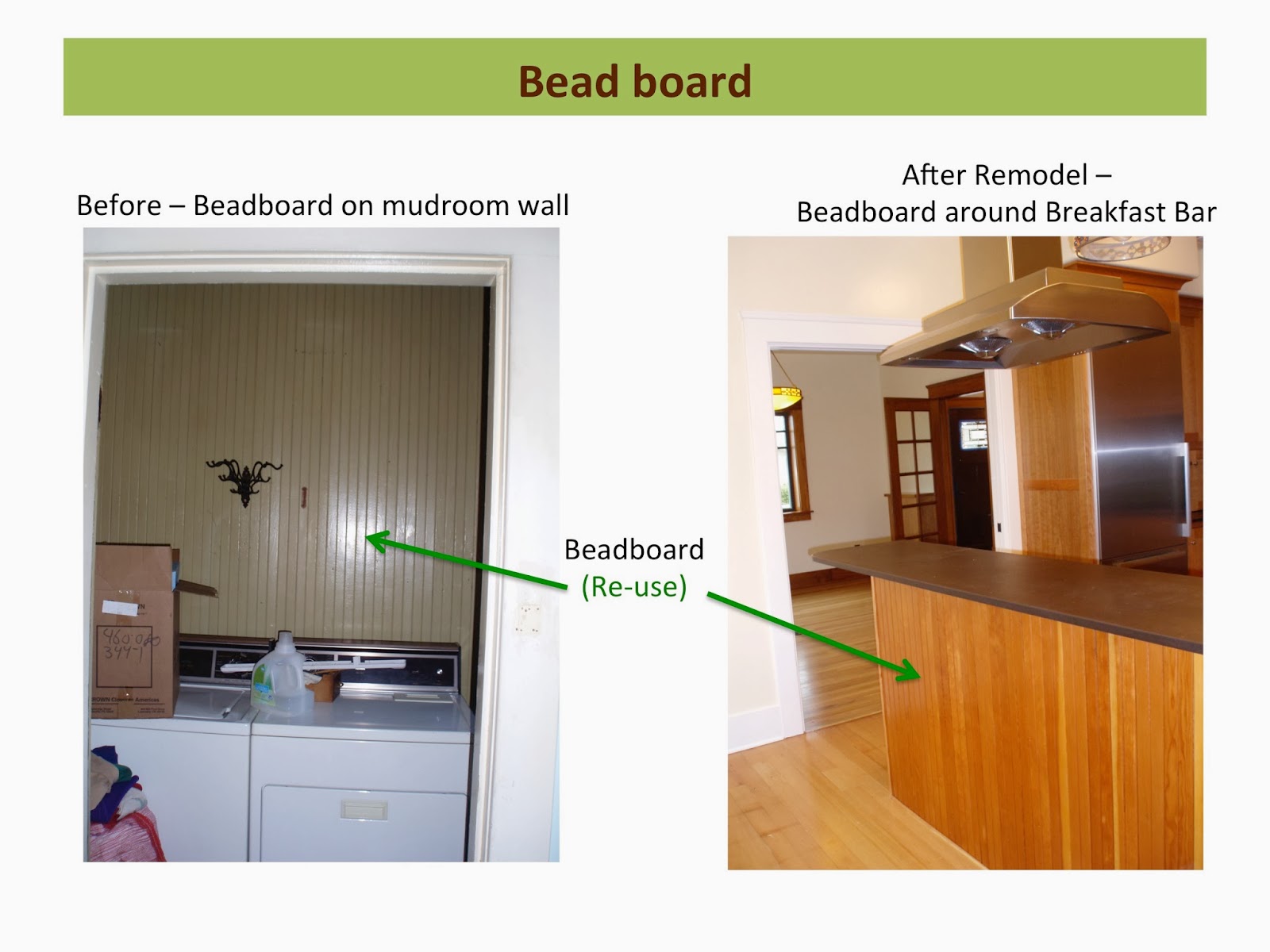 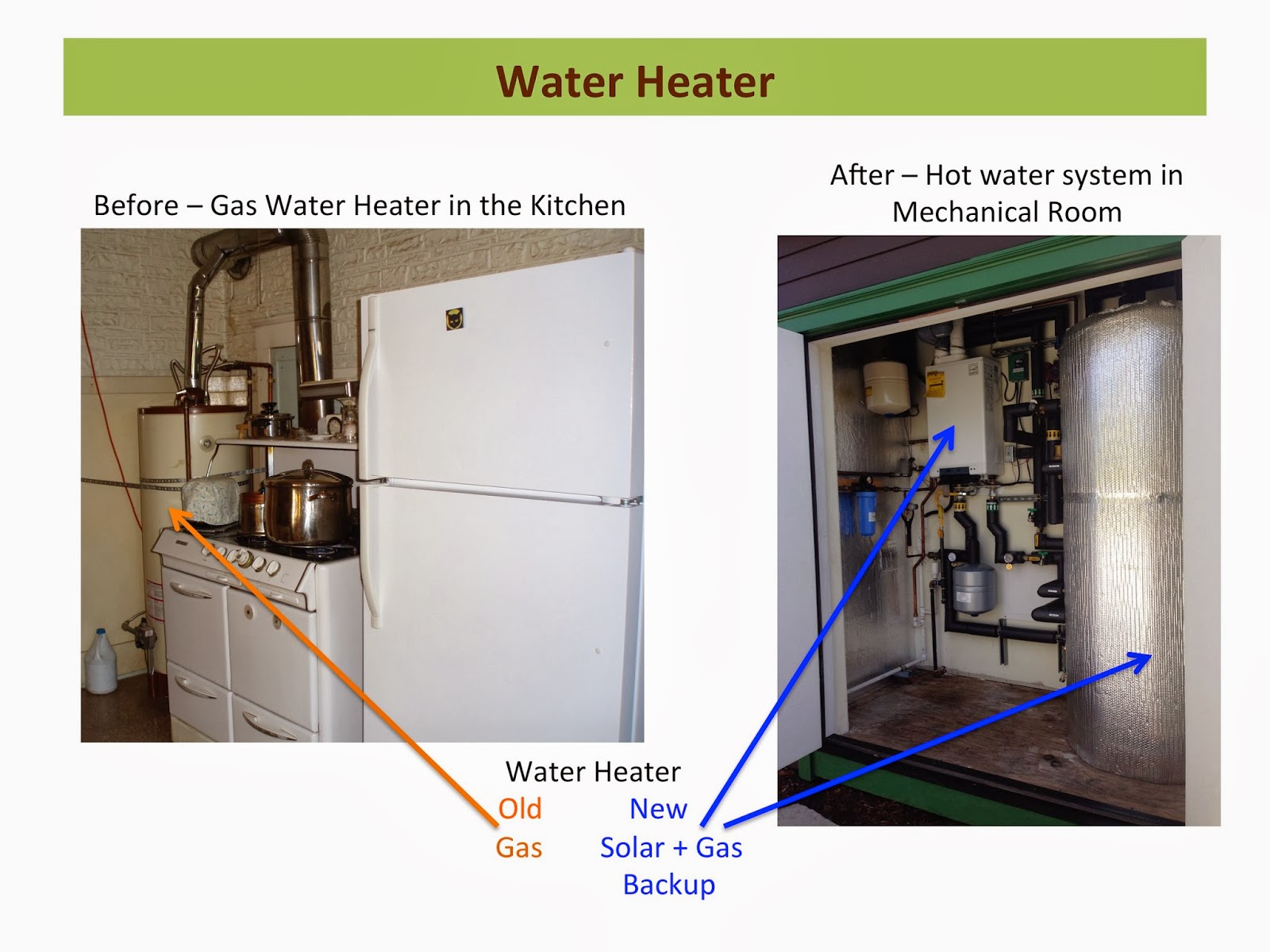 In our old kitchen the gas water heater was next to the stove, strapped onto the wall.  The gas stove and the water heater shared a flue going up through the ceiling to exhaust above the roof. 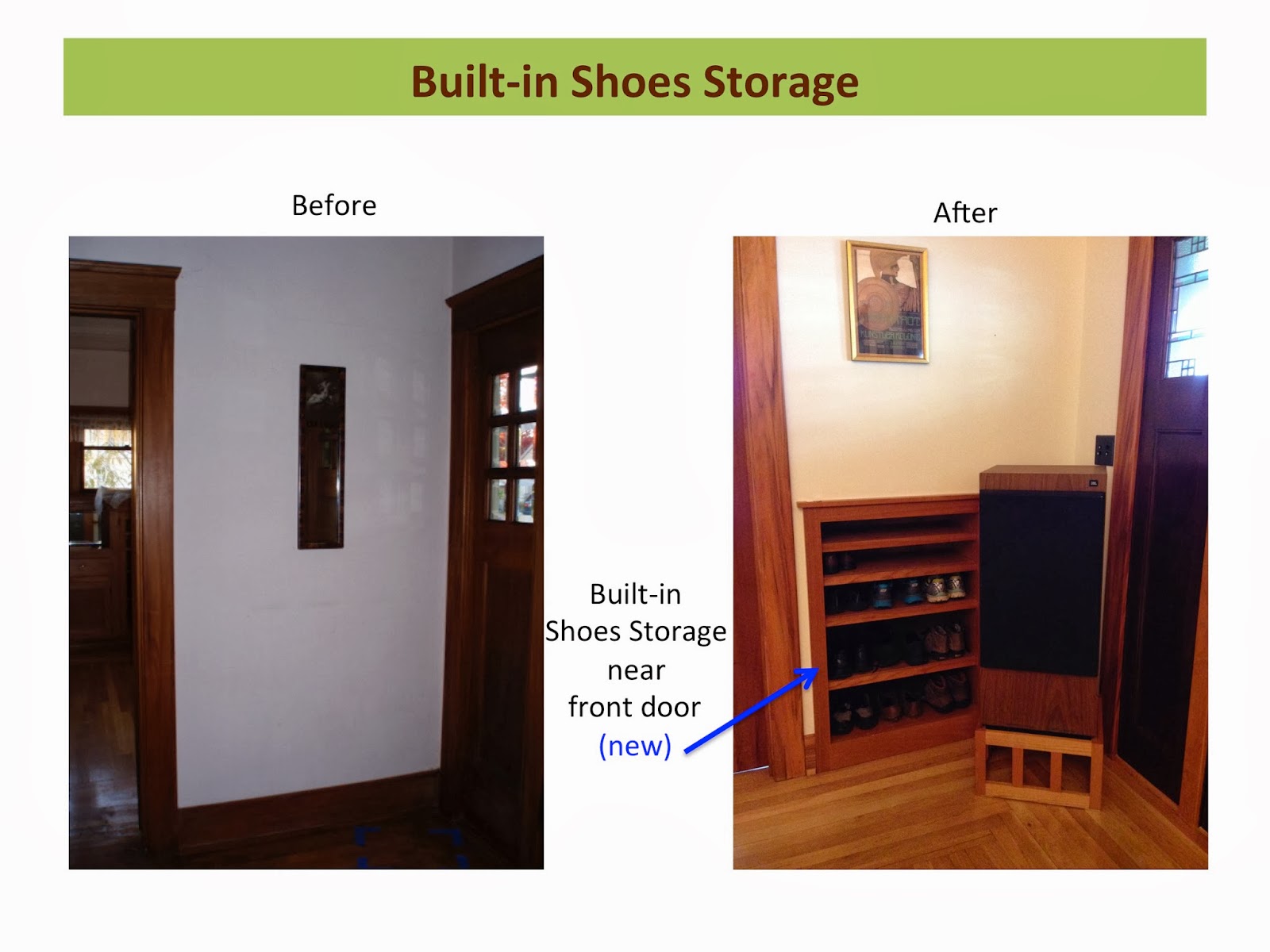 As you enter the front door you’ll see this tidy shoes storage to your right.  We ask all visitors to take their shoes off in our house and this is one of the places where you can store them.

Also made by Loughridge Cabinets, the concept of the Japanese “getabako” is expressed in the arts and crafts style.This is built back into the wall and protrudes through the dining room. In the dining room the back side of the shoes storage cabinet looks like a nice stand. 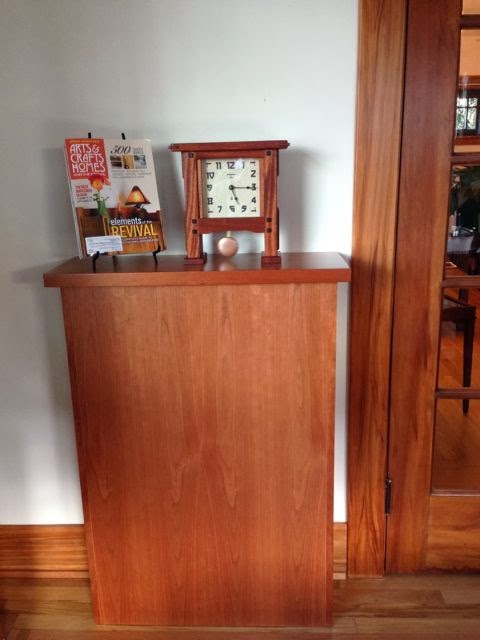 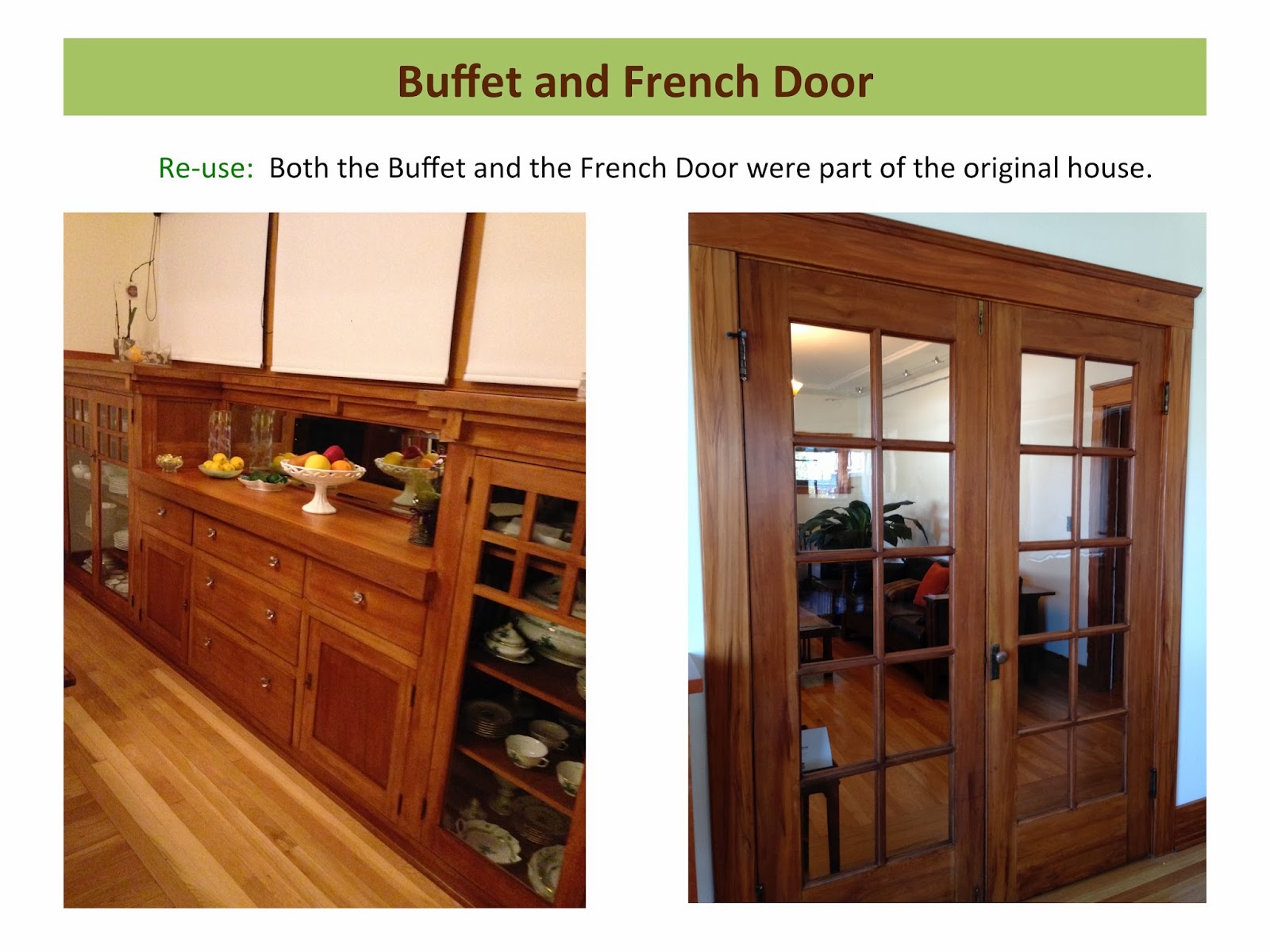 The buffet is the original built-in furniture that stayed in place during construction.  It was covered up for 13 months while the crew worked around it.

French door between the dining room and kitchen is also original piece of the house. 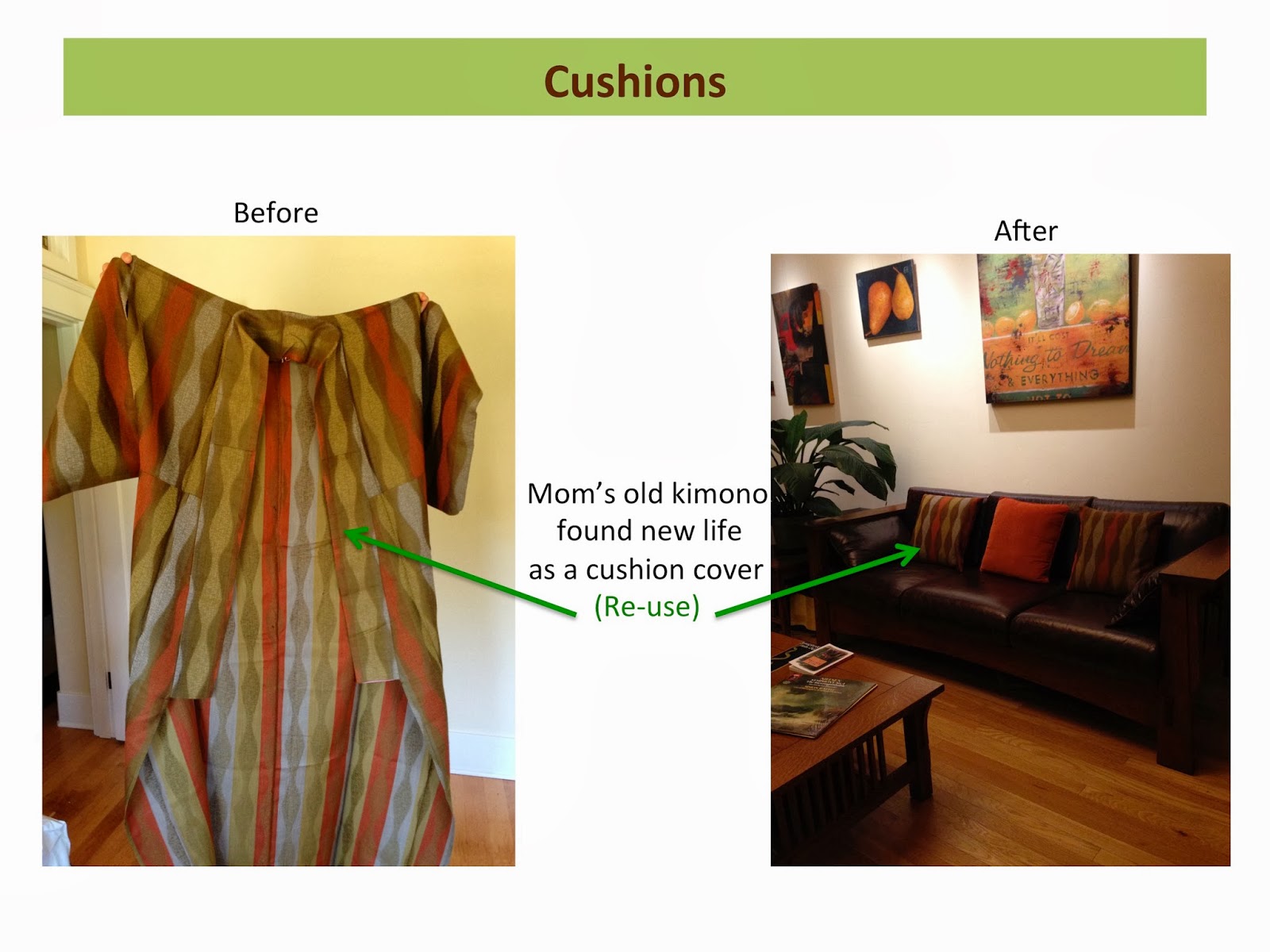 Finally, I added a touch of Japanese influence in this arts and crafts house by re-using my other’s old kimono as cushion covers.