Today we added 10 more inches of blown-in cellulose insulation in the attic.  This will help keep the house a bit more cooler in the summer and warmer in the winter.  It’s been on the warm side lately so this extra insulation will help.  Most houses in Santa Cruz does not have air conditioning because we have such temperate climate here so some homes will get toasty warm when we don’t have the morning coastal fog.  Even on these hot days the thermostat in the hallway never rises above 75F (23.9C), so it’s still comfortable inside the house.

Are you curious how much energy Midori Haus uses and how it compares with other houses in the area?  The proof is in the utility bill.  When I get the utility bill from Pacific Gas & Electric (PG&E) each month via email I always log in to their site to look at the “My Usage” tab to see how our electricity and natural gas usage compare with similar homes in the area.  Take a look at these screen shots: 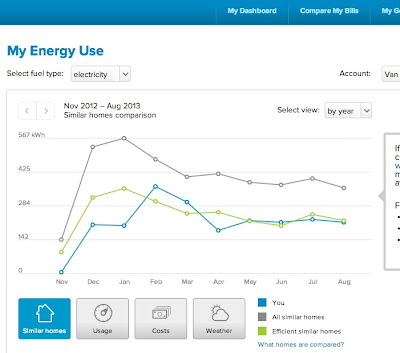 Our electriity usage averaged 227kWh per month for the last 6 months (Mar-Aug).  You can see from the graph that our usage (blue line) is pretty low, tracking closely to the efficient homes (green line) in the area.  The house was in construction through January and we started living full time in the house on March 15, 2013 when the blinds for the windows were installed.

Electricity usage was a bit higher in February and March when we had several fans and vaporizers running 24/7 to remove the smell coming from the stains applied to the fiberglass door.  Usage was low in April when we were on vacation for 10 days. 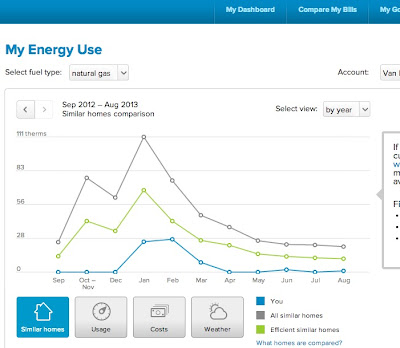 We use a gas boiler as a backup heat source for domestic hot water.  Primary source of heat for the hot water is the sun.  We have a solar thermal system (to be explained in a separate post) that pre-heats the hot water.  We also have a natural gas barbecue grill out on the deck.  That accounts for the little blip in gas usage in the summer — 2 Therms in June, 1 Therm in August. 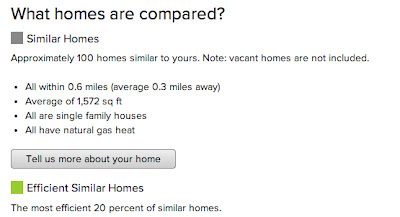 You may wonder what homes are compared in these graphs.  PG&E does a good job of giving us an apples-to-apples comparison.  The definition of similar homes for us is single family houses with an average of 1572 sq ft using natural gas heat within 0.6 miles.

Our house is technically heated by gas because PG&E does not have a category for homes heated by the sun.  How is our house heated?  When the temperature in the hallway thermostat dips below 68F a pump in the mechanical room turns on to circulate hot water (mostly heated by the sun) through the hydronic coil in the house.  The hydronic coil is used to warm up the air in our ventilation system. For a typical house this amount of heat is not enough to make it comfortable.  But Midori Haus is a passive house that is super-insulated and super-airtight.  So we only need the equivalent energy of half a hairdryer to heat our home in the winter.  Should the temperature in the hot water tank dip below 120F then the backup gas boiler turns on, thus the house is technicall heated by natural gas.  But as you can see from the graph above this doesn’t happen regularly.  The higher usage of natural gas in January and February reflects the start-up condition for the hot water heater.  The storage tank and the backup gas boiler were installed and turned on in January when it was cold outside and the sunlight duration short.  So the gas boiler did bulk of the work to heat up 165 gallons of water to 120F.  It’s amazing that we only used only about quarter of natural gas that similar homes used in January and the house was comfortable.

The amount of energy reflected in the utility bill is not only for heating the house.  A good portion is attributed to appliance choices and our behavior.  At Midori Haus we use electricity for cooking, clothes washing, lighting and handful of gadgets plugged into the wall.  When we lived in the 1300 sq ft condo we had lots of gas appliances — wall furnace, standard hotwater heater, stove and oven.  So I expected our electricity usage to be a bit higher at Midori Haus than at our condo.  And it is a bit higher but not by much.  To compare the energy usage between similar seasons I grabbed a few screen shots of the energy usage at our condo in 2012: 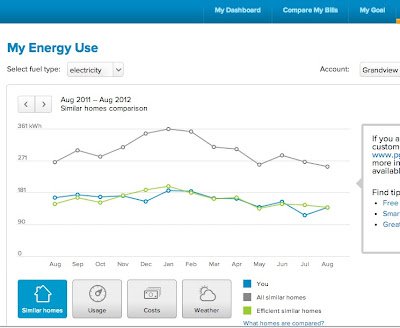 The monthly electricity usage averaged about 147 kWh for the condo for the same period last year (Mar – Aug 2012). Some of the gadgets consuming electricity are the same — laptop computers, stereo, hair dryer, coffee grinder, etc.  The occupant behavior is somewhat similar too.  The difference in occupant behavior is that I spend far less time at Internet cafes now.  Back in 2012 when I was uncomfortable at the condo (I thought it wasn’t warm enough) I packed up my computer and hung out at the local coffee shops.  Now I don’t do that. 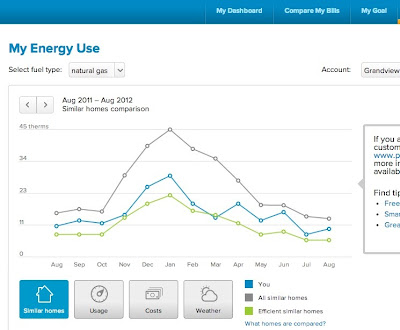 The gas usage at our condo has an interesting story.  In the winter of 2011-2012 we did an experiment of setting the thermostat for our wall furnace really low and wore layers of sweaters to keep warm.  In our mild climate in Santa Cruz if you set your thermostat at 55F in the winter it hardly turns on.  I thought our gas usage would be pretty flat to track with the summer usage pattern.  But it didn’t.  It was lower than similar homes and the curve rather bumpy. The winter usage went up as if we were turning on the wall furnace but we did not.  Our gas usage (blue line) was even higher than efficient similar homes.  What’s going on?  The likely culprit is the water heater.  The gas water heater at the condo was located in a cabinet next to the refrigerator in the kitchen.  It’s in the conditioned space so it had no insulation around the water heater.  This is OK for most times when the kitchen temperature is between 68F and 72F, but not when the kitchen temperature is at 58F.  So the water heater was using more gas in the heater to keep the water warm.  Interesting, isn’t? 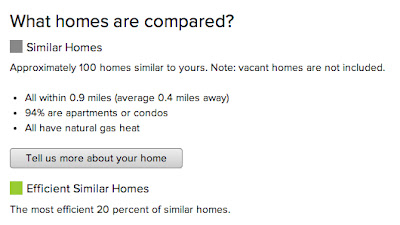 The similar homes for the condo are all apartments or condos with natural gas heat located within 0.9 miles.  Our condo shared 2 walls with our neighbors so 50% of the walls are well-insulated.  But it is definitely not airtight and I was often cold in the winter.  People in cooler climate may laugh when I complain about it being cold in the winter here but I grew up in Hawaii where it’s nice and warm.

It’s hard to compare the energy bills of homes with different types of appliances (e.g. gas stove top vs. induction cooktop, gas clothes dryer vs. electric condensing clothes dryer, gas wall furnace vs. hydronic coil).  To do an apples-to-apples comparison I took the 6 months data (Mar – Aug 2013) for Midori Haus and the 6 months data for the condo (Mar – Aug 2012) and converted the gas usage (measured in Therms) to equivalent electricity usage (measured in kWh).  1 Therm is equivalent to 29.307 kWh.  Plotting this combined usage data on a graph I found the Midori Haus total energy usage to be much less than the total energy we used at the condo.  It’s the same people with same occupant behavior but  living in a different space.  This means the dwelling itself is much more energy efficient and the space is much more comfortable.  Passive house is amazing. 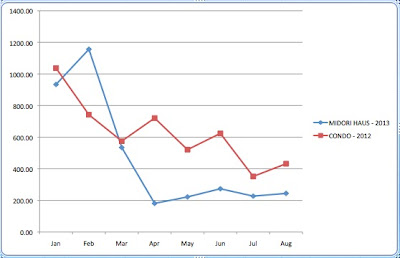